The graph isomorphism problem is: (GI) Given two graphs, determine whether they are isomorphic. The fastest known algorithm for GI is quasipolynomial; no polynomial time algorithm is known (despite many claims). GI is not known to be NP-complete. GI is not known to be in co-NP.  There are polynomial time algorithms for many special classes of graphs (bounded degree, bounded genus, classes with excluded minors or topological subgraphs). Few of these are practical, planar graphs being a notable exception. It is possible that group isomorphism is easier and that permutation equivalence of linear codes is harder than GI. But nobody can prove it.

A key concept used by nauty and other tools is partition refinement (partition = colouring). An equitable partition is one where every two vertices of the same colour are adjacent to the same number of vertices of each colour.

Refinement steps
All competitive isomorphism programs generate a tree based on partition refinement. The nodes of the tree correspond to partitions (colourings). The root of the tree corresponds to the initial colouring, refined. If a node corresponds to a discrete partition (each vertex with a different colour), it has no children and is a leaf. Otherwise we choose a colour used more than once (the target cell), individualize one of those vertices by giving it a new unique colour, and refine to get a child. Each leaf lists the vertices in some order (since colours have a predefined order), so it corresponds to a labelling of the graph. If we have two leaves giving the same labelled graph, we have found an automorphism. If we define an order on labelled graphs, such as lexicographic order, then the greatest labelled graph corresponding to a leaf is a canonical graph. However the tree can be much too large to generate completely. It will be pruned by means of node invariants.
4
1     2     3     4     5     6    top
A node invariant is a value Φ(ν) attached to each node ν in the tree that depends only on the combinatorial properties of ν and its ancestors in the search tree (not on the labelling of the graph). Node invariants, together with automorphisms, allow us to remove parts of the search tree without generating them. Each of these observations enables us to prune parts of the search tree. The hope is that the remaining parts will be small enough to compute. 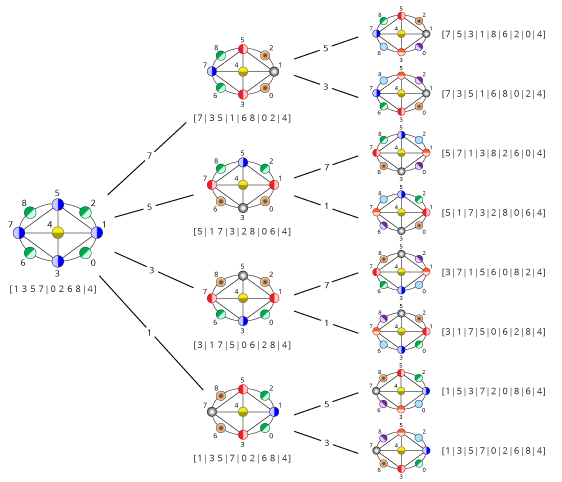 Equitable partitions are in general unable to capture the orbit partition of vertices of a graph, as shown by the next example: vertices 3, 4, 5 and 6 are in the same cell of the equitable partition but there isn't any automorphism between vertices in {3, 4} and in {5, 6}. 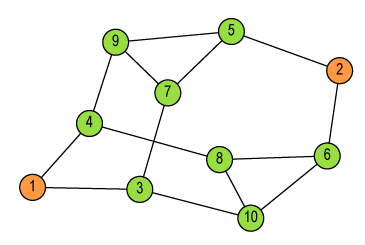 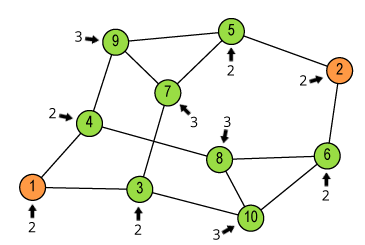 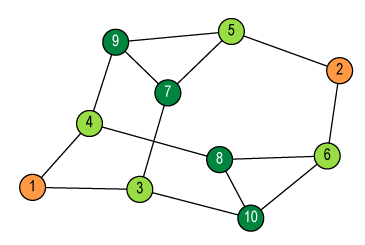 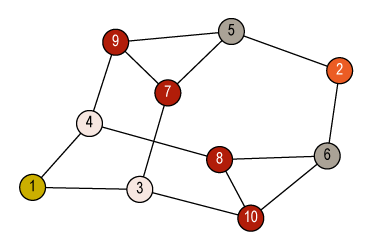 The individualization-refinement method allows − in two steps − for detecting an automorphism which maps vertex 3 into 4.
Remark: Assume that an ordered sequence of n (the number of vertices of the graph) colours is given. The individualized vertex keeps the colour of the cell to which it belongs, while the remaining vertices in that cell are assigned the next colour. 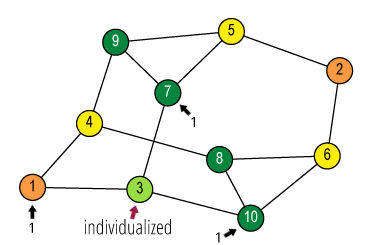 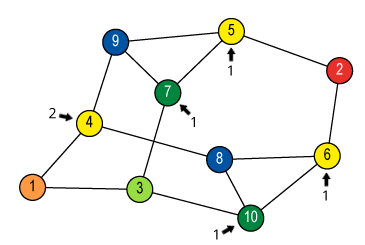 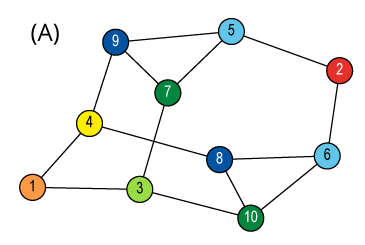 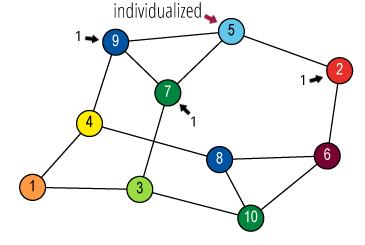 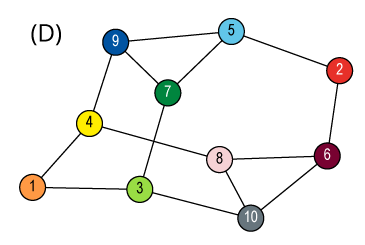 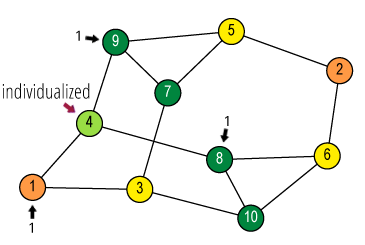 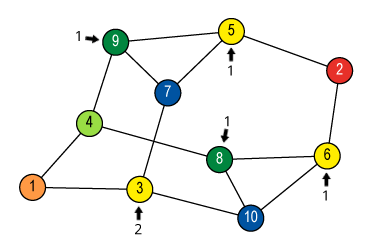 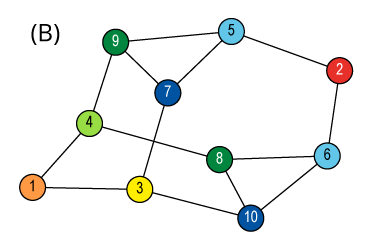 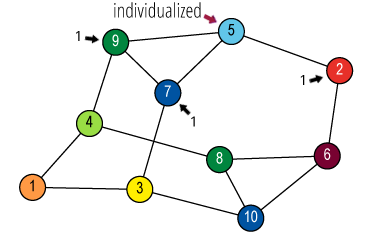 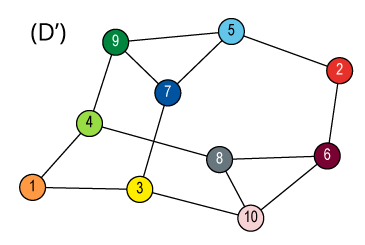 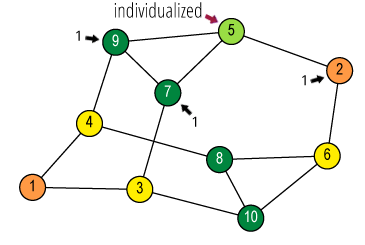 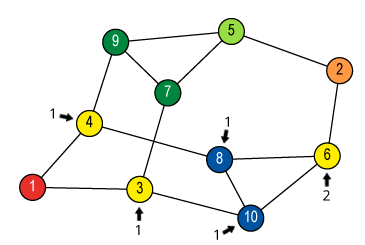 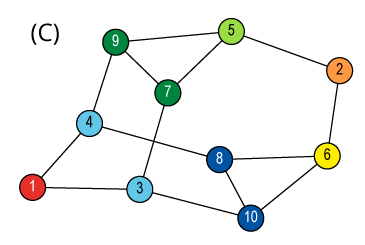 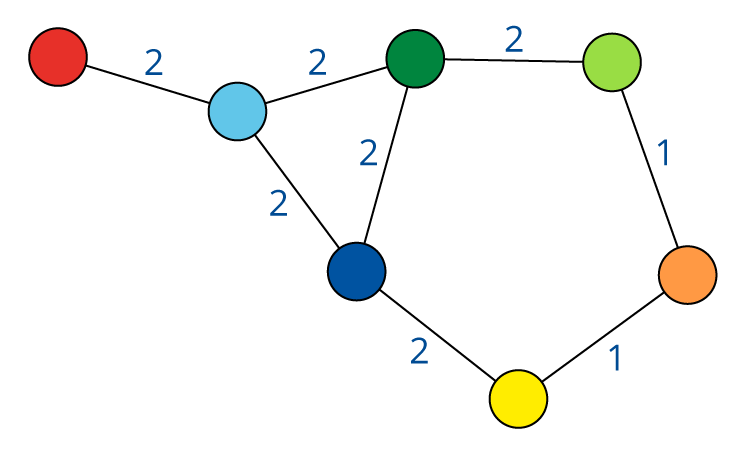 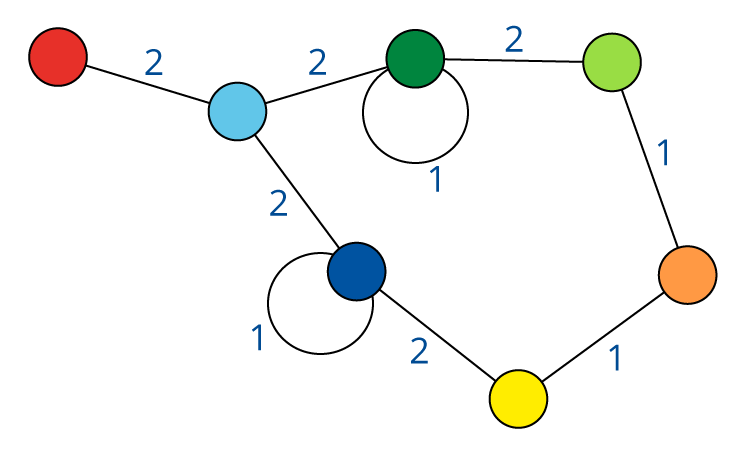 In this example, Q(A) = Q(B) ≠ Q(C). There does not exist any automorphism between graphs (A) and (C). Hence, there is no automorphism mapping vertex 3 to 5.

Example of a base and strong generating set. For a graph with n vertices there are at most n − 1 generators, even though the group size can be up to n! 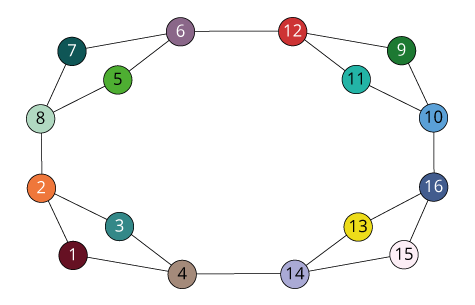 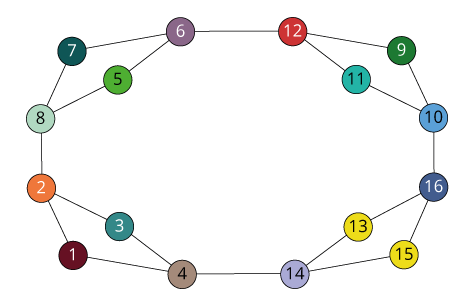 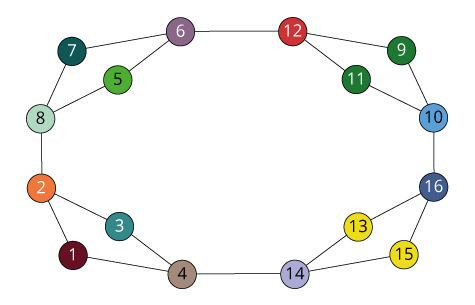 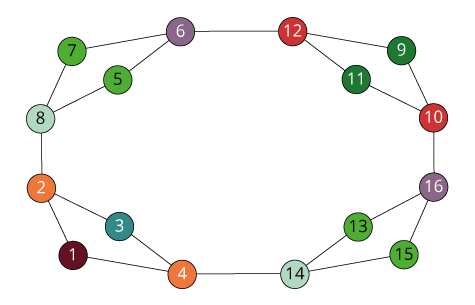 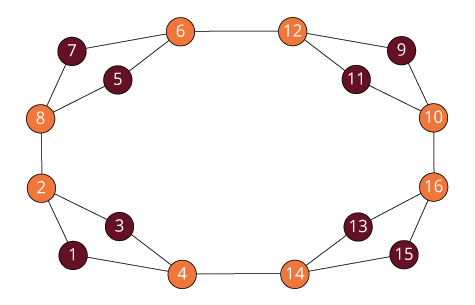